Is The Himalayan Dog Chew Safe For Your French Bulldog?

A fellow Frenchie owner told me about these Himalayan Dog Chews and I must admit, I had never heard of them until my friend enlightened me.  I was a bit worried and wondered “is the Himalayan Dog chew safe?”  I ordered some after doing some research to see how my Frenchie Augie liked these Himalayan dog treats.

What Exactly Are Himalayan Dog Chews?

This was the first question I asked before ordering these dog treats for my little Frenchie.  Before I bought anything, I needed to know if they were safe so the first thing I looked into what these things are.  Apparently the original Himalayan Dog Chew is a long lasting dog chew that takes some serious chewing for your dog to chew through.

They then dry it for multiple weeks and it forms into a really hard chew. Your French Bulldog would need to know on the end of the dog treat for multiple hours in order to make any headway on this thing.  What’s nice about this dog chew is that it is completely all-natural and contains no preservatives. It is an authentic type of cheese eaten by the people of the Himalayas.  The way they came about as a dog chew is that a man was making his ‘chews’ and he dropped one and his dog loved it! (Even though the packaging of the brand I bought said “not for human consumption.” but I am sure that is just due to some US regulation).

What are Himalayan Dog Treats Made From?

I learned over the years that the more ingredients in a food, and the more processed it is, its likely it isn’t that good for you.  I was impressed to learn how simple the ingredient list is on these things.  Take a look: 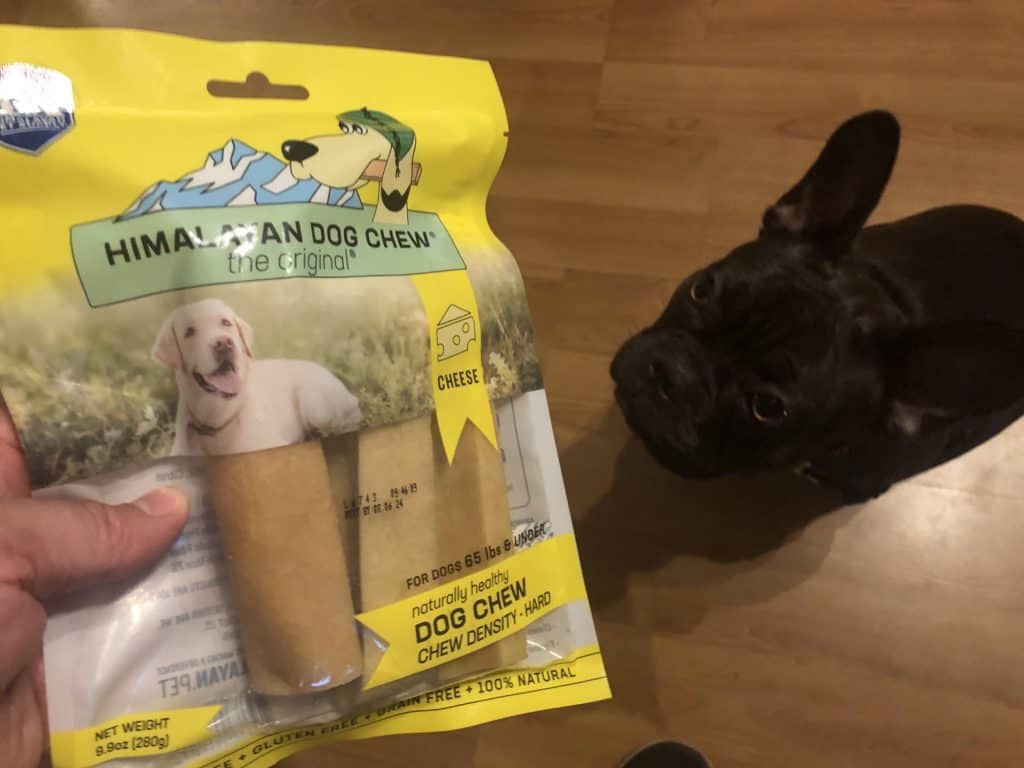 This Is the Himalayan Dog Chew We Bought For Augie

Click Here To See This Himalayan Dog Chew On Amazon

So Is The Himalayan Dog Chew Safe?

In my research I found many concerned dog owners like me questioning the safety of these chews.  The overall consensus is that the answer is Yes, and it depends.

Any time you give your Frenchie a new treat it is wise to keep a close eye on then and start with a short window of time with that new chew to see how they do with it.  You should watch your French Bulldog closely for any reactions to ingredients.  The ingredients in these Himalayan treats are fairly minimal so you should be good here. 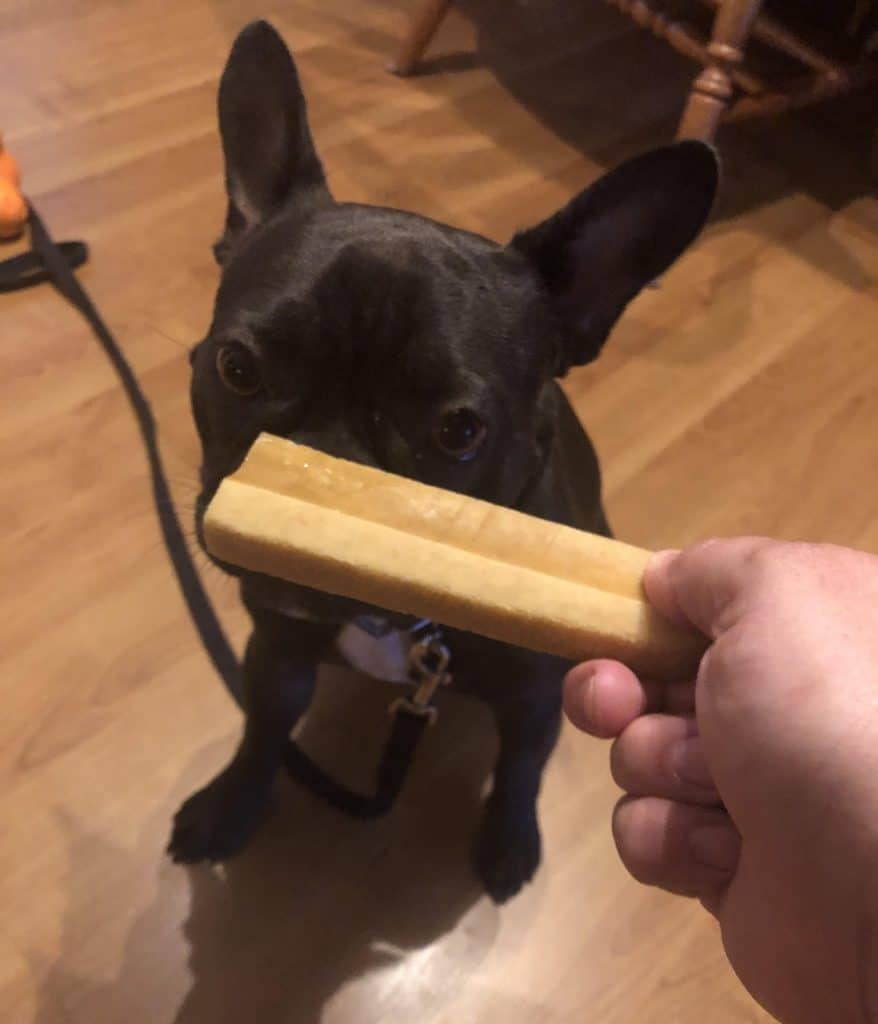 My real concern after researching these treats was the choking hazard some people mentioned.  I understand the concern people had so I was careful when I first gave it to my Frenchie.

From everything I read Himalayan dog chews weren’t as big of a choking hazard since they are made to be very hard.  Further they are completely natural with minimal ingredients. 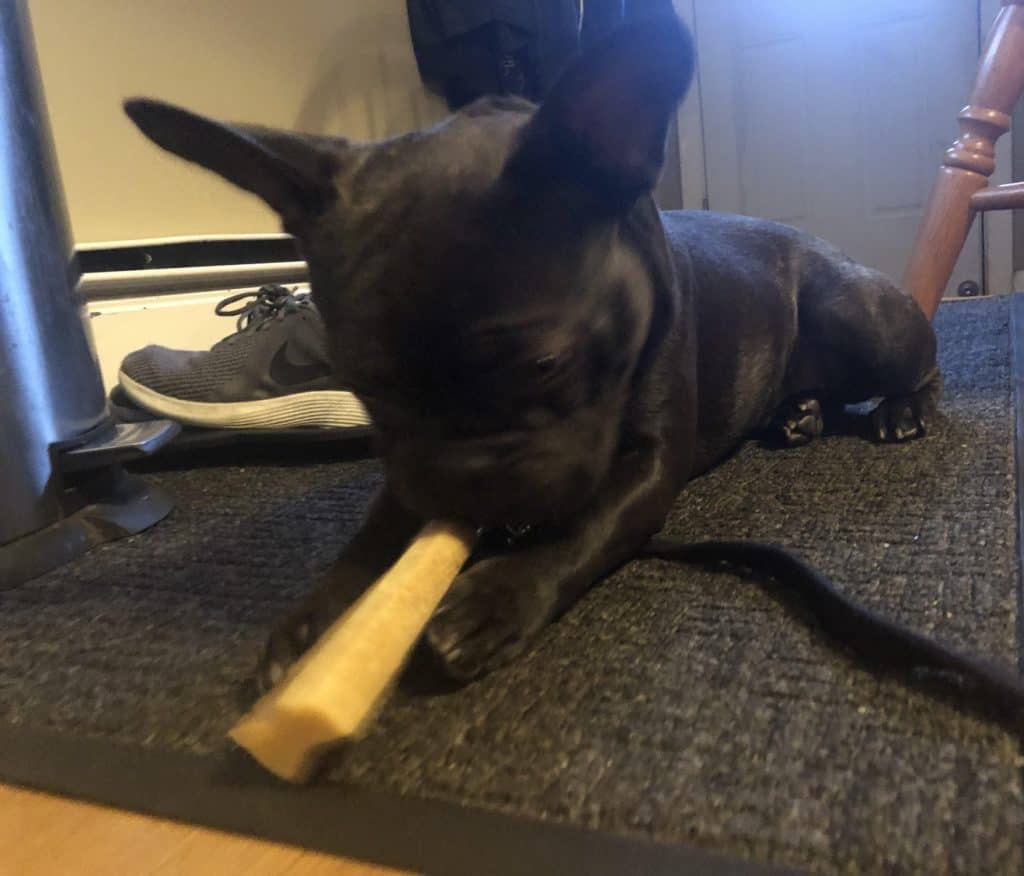 Some dog owners simply advised to always supervise their Frenchie when letting them have a chew like this and to not leave them unattended.  This may seem obvious but it is worth stating.

While it takes a lot of effort for a dog to whittle down the Himalayan chew, as they get it down you should consider taking it away from them as the chunks get smaller.  Later in my Himalayan Dog chew review I will share a nifty way to extend the life of the chews.

What About Puppies?  Are Himalayan Dog Chews Safe For Puppies?

I asked my dog trainer about this and she advised against puppies having these Himalayan dog chews.  She said that puppies under six months old should not be given these chew treats. Apparently Frenchie puppy teeth are not permanent, just like baby teeth for humans.  Their little puppy teeth can break pretty easily.  (I remember when I found one of Augie’s puppy teeth on the floor and I was freaked out about it.  Found out later this is completely normal for puppies to lose puppy teeth.)

My 11 month old French Bulldog has never once shown an ounce of food aggression.  We learned from our dog trainer how to avoid food aggression and did a lot of work to that end and never had an issue until I gave my Frenchie his first Himalayan dog chew.  He LOVED it!  However, when we tried to take it away from him he did NOT like that at all.  We used a tactic of tempting him with some other dog treats he loves to put his Himalayan chew down so we could take it and put it back in the bag.  Our plan worked but we have been careful about this and will be working on this with the trainer.

13 Reasons Himalayan Dog Chew Treats Are Great For Your Frenchie:

Final Tip:  What To Do Once the Himalayan Chew has Worn Down?

While these Himalayan dog chews are tough and take some serious chewing they will eventually wear down.  Frenchies are darn stubborn and persistent after all.  Once the dog chew has been worn down to a smaller chew you don’t have to throw it out.  You can instead take the small chunk and microwave it. After a short stint in the microwave, the Himalayan chew treat will expand and make an all new treat for your Frenchie.  This will help extend the life of the treat even more!

Conclusion – Is The Himalayan Dog Chew Safe For Your French Bulldog?

I would say Yes, but proceed with caution and keep your little four-legged friend under supervision when you let him chew on it.  I like the brand of Himalayan dog chews we bought and I like the production processes they use to make these treats.  I would recommend taking it away when you can’t supervise him AND when it gets too small and could pose a choking hazard.  This can be a great dog chew for your Frenchie and if used properly!  Happy chewing!

PS – If you are looking for other dog treat ideas, this is an interesting innovet dog treat to consider.

Kyle has been a bully breed lover for over 13 years. His newest dog is Augie the Frenchie. His mission is to share his French Bulldog experiences so other Frenchie owners can give their dog a great life.
PrevPreviousWhat Is The Best Dog Flea Shampoo? Fleas and Ticks Beware!
Next7 of the Best Puppy Cameras to Buy for Your French BulldogNext