The French Bulldog Tail: Is Their Tail Natural Or Is It Cropped?

A lot of French Bulldog owners and people interested in the breed ask the question, “are French bulldogs born with long tails which are then cut off and docked for “cosmetic” reasons?”  I am happy to report that the answer to this is No. Docking or cutting the tail is not something that is done to French Bulldogs.

French bulldog’s tails are not docked or cut in any way like in some other breeds.  Docking is a cosmetic practice for no medical reason and I am not a fan of this practice.  French Bulldogs are naturally born without long tails. They are genetically bred to have short, stumpy little tails.  You will see a variety of tail types in various French Bulldogs including some curved tails, some screw shaped tails, and some may even have very short and straight tails. The French Bulldog stumpy tail is due to genetics and breeding.

Do French Bulldogs Even Have Tails? 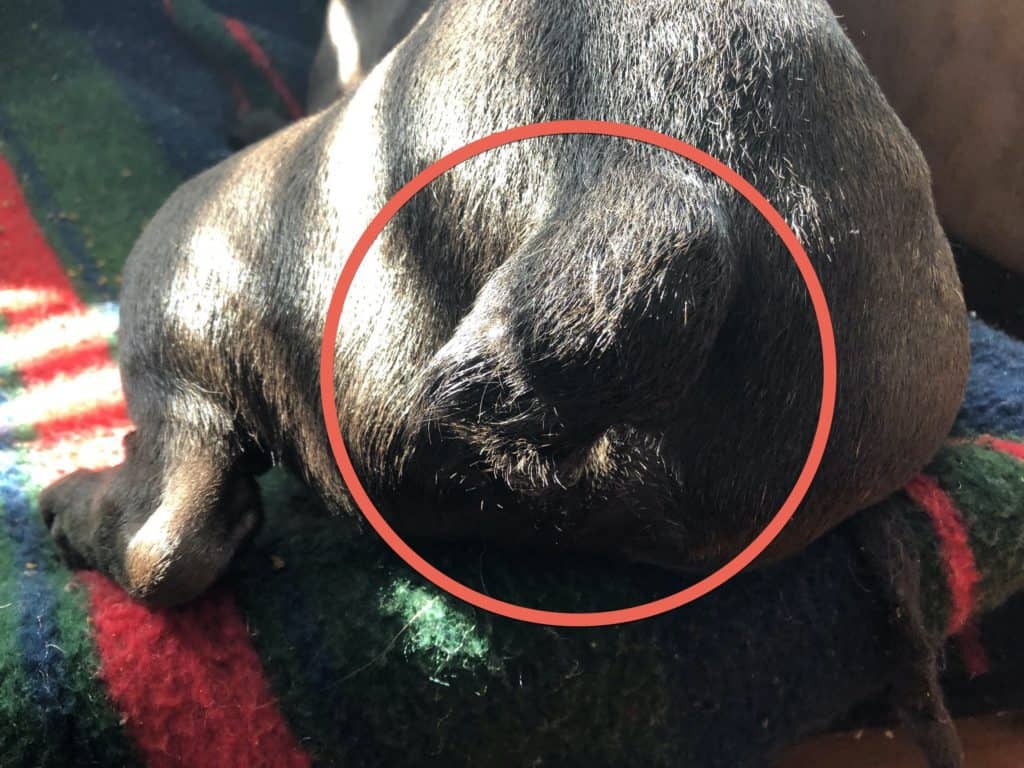 That is my French Bulldog Augie’s tail.  French bulldogs have relatively short tails compared to other dog breeds.  The Frenchie tails primarily come in a few different shapes. You may see stumpy tails, straight tails, straight down and stumpy, cork screwed, and even a thick root with a very fine tip style tail.  According to the French Bulldog breed standard on the AKC website “the tail is either straight or screwed (but not curly), short, hung low, thick root and fine tip; carried low in repose.”  A French bulldog tail standard requires that it should cover the anus and should not be able to rise above the horizontal.

While those little Frenchie tails are adorable they are prone to develop some tail issues.  Their short compact bodies can be especially prone to these issues. While some French Bulldogs may just be prone to these issues poor breeding practices can further increase the chances.  One issue is Hemivertebrae and another is French Bulldog tail pocket infection. Let’s further examine these two issues in more depth.

What Is French Bulldog Hemivertebrae?

Hemivertebrae happen when the vertebrae of the French Bulldog spine are deformed.  This is a congenital issue. The vertebrae fuse and develop abnormally during growth.  This creates a twisting wedge of a spine instead of what should be a very straight spine. Hemivertebrae can lead to a twisting in the spinal cord of the French Bulldog as well.  This twisting and compression can negatively affect the central nervous system of your Frenchie.

Hemivertebrae are responsible for the characteristic “screw tail” of some French Bulldogs.  There is no spinal cord in the tail so that’s less of an issue. However, several defective vertebrae other than in the tail may be affected and this can cause problems.

This issue in French Bulldog puppies usually becomes apparent by the 9th month of age. It is at this age in your Frenchie’s development that their spine becomes fully developed and this problem will manifest fully. Hemivertebra can be mild to severe in nature.  If it is mild only one or two vertebrae might be affected. In severe cases it could greatly impact the French Bulldog’s ability to function in daily life.

If you suspect your French Bulldog suffers from Hemivertebrae then you will want to seek the guidance of a qualified Veterinarian.  A Vet can diagnose a French bulldog using diagnostic tools such as an X-ray and physical examination. In some cases they may use a CT scanner or an MRI.  When a Vet does diagnose Hemivertebrae they may prescribe different anti-inflammatory medications. In severe cases they may require surgical intervention to help alleviate the symptoms.

A French Bulldog tail can be an adorable thing and it is part of their character.  While it is a cute little thing it can cause some issues as well. It is important for French Bulldog owners to be fully aware of these potential issues.  Proper care and hygiene can be a great way to keep your Frenchie healthy in most cases keep their tail healthy.

Kyle has been a bully breed lover for over 13 years. His newest dog is Augie the Frenchie. His mission is to share his French Bulldog experiences so other Frenchie owners can give their dog a great life.
PrevPreviousHow To Clean A French Bulldog’s Tail Pocket
NextEye Drops for French Bulldogs: How to Pick the Right Eye Drops For Your FrenchieNext