Augie’s First Birthday – A Ride, A puppuccino, A New Toy, A Bath, and More!

Yesterday (October 26th) was Augie’s first birthday!  It is hard to believe my little French Bulldog is already one year old.  It seems like yesterday we picked up our little guy from the breeder weighing in at less than a pound.  Today he is weighing in at 28 pounds and we celebrated his birthday!

A Ride, A Puppuccino, A New Toy, A Bath, And More For My Little Guy! 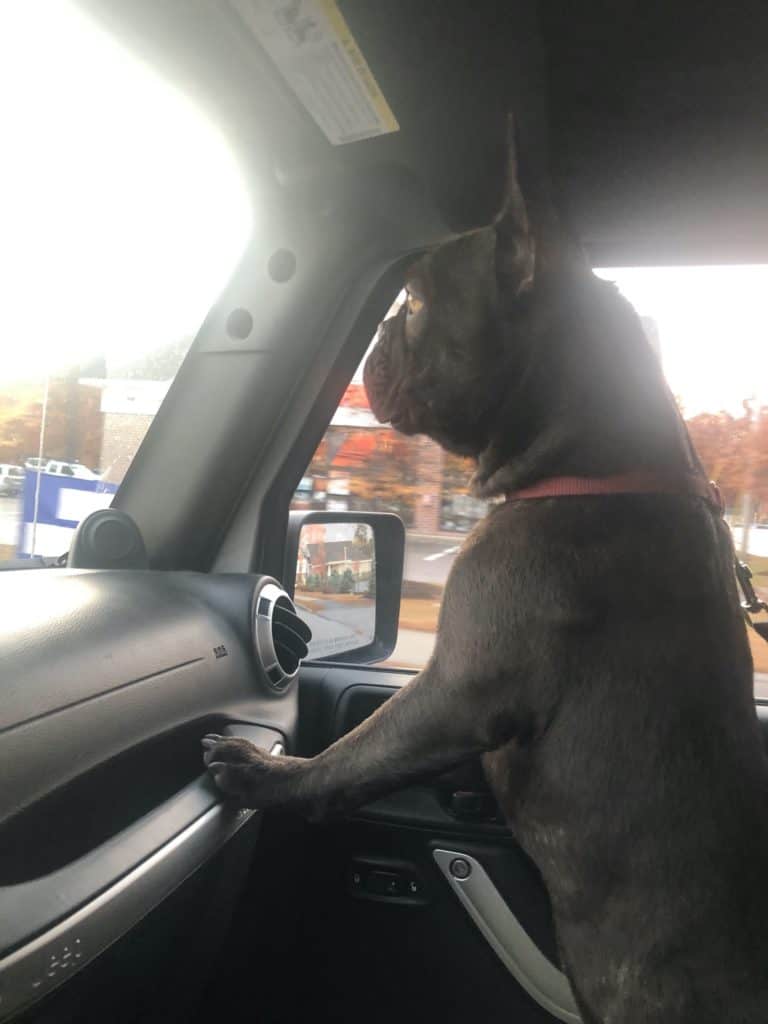 Augie and I woke up early to go for a ride in my Jeep Wrangler.  I buckled him into his doggie seatbelt, and we hit the road towards Starbucks to get a coffee for me and a Puppuccino for him.

What’s a Puppuccino you ask? 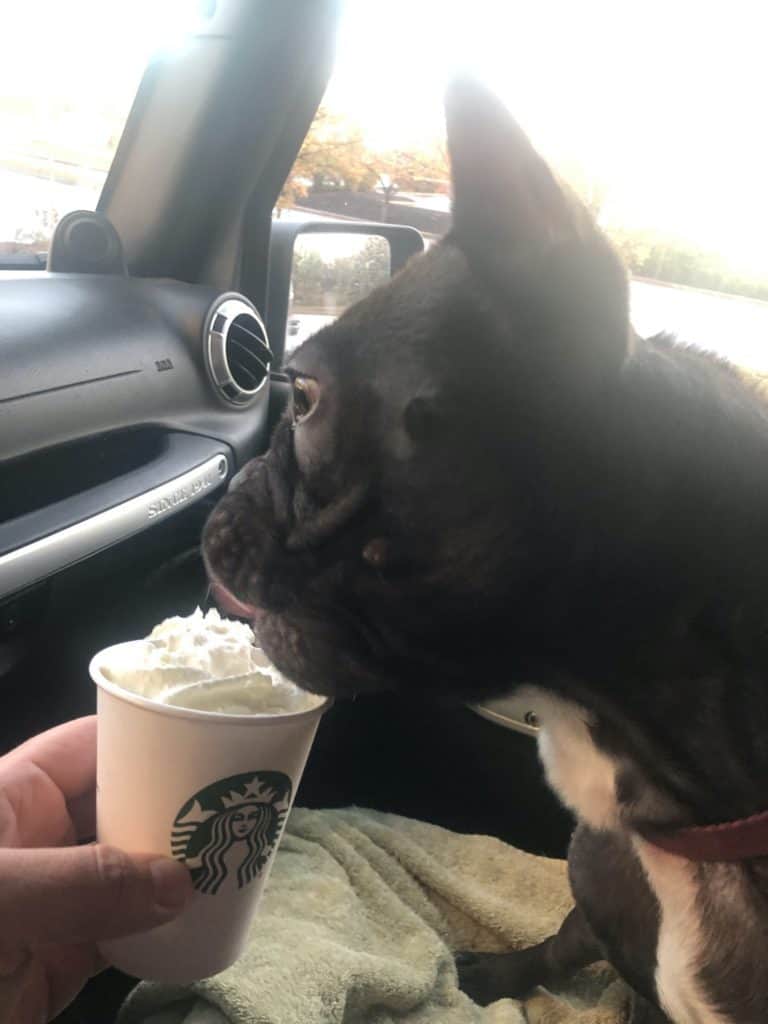 A Starbucks Puppuccino is a Free espresso-shot-sized paper cup filled with whipped cream, just for dogs.

Ever since Augie’s first ride through the Starbucks drive through he LOVES them!  These Puppuccino treats aren’t just for birthdays, we get one every time he goes for a ride to Starbucls.

As soon as I pull up to the Speaker and place my order he gets pretty excited, puts a paw on my arm, and salivates with anticipation for his tasty birthday treat.   He enjoys this treat and I figured it was the perfect way to kick off his birthday celebration.

Augie loves walking around at the Farmer’s Market.  He meets other dogs, he gets attention from adoring humans, and he gets treats!  There was a very nice vendor at the Farmer’s Market who we bought some organic liver dog treats from.  We mentioned it was Augie’s first birthday and she very kindly have us a dog bandana as a gift for our little birthday Frenchie.  Here’s what the dog bandana looked like: 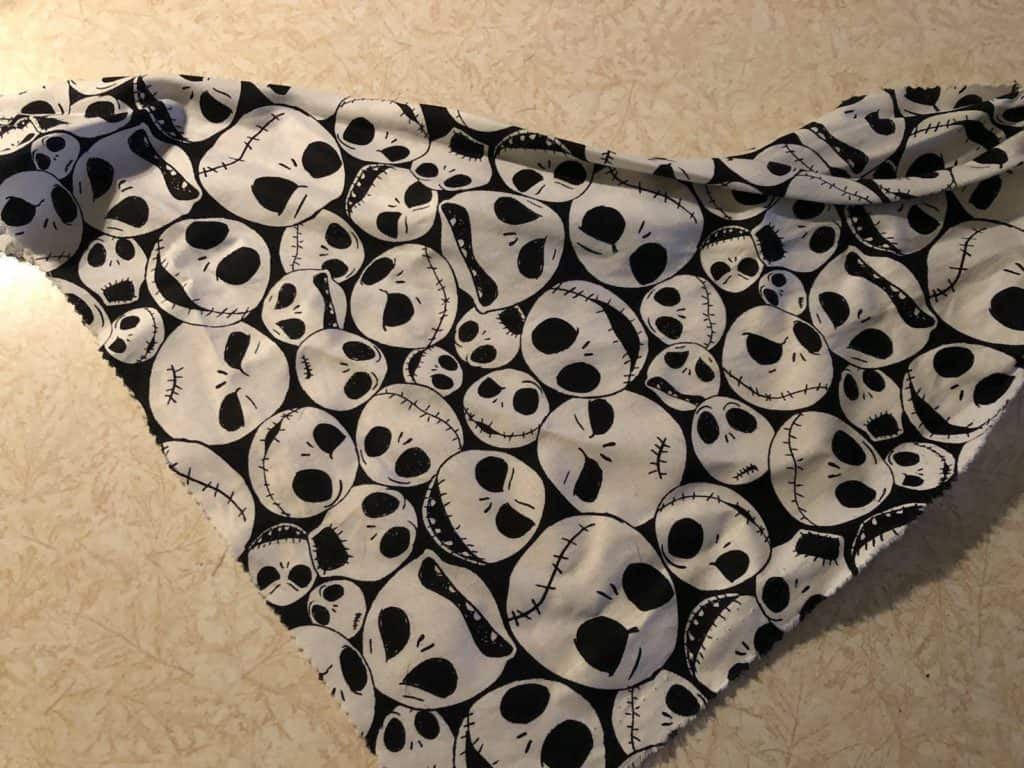 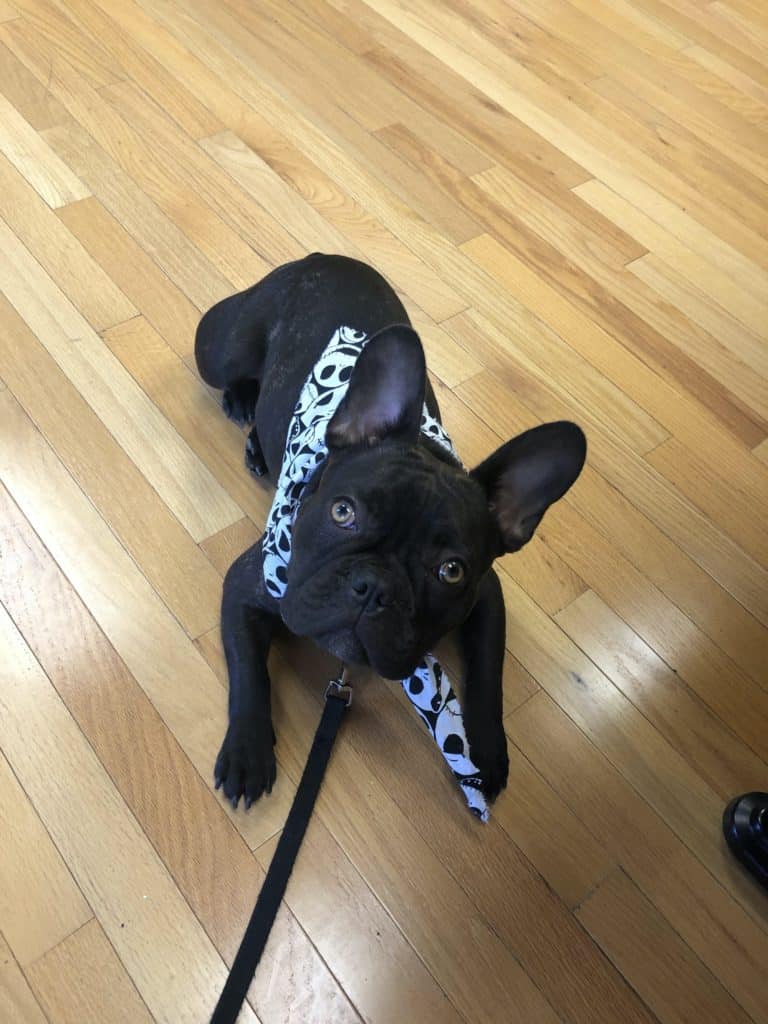 After We Got Back From The Farmer’s Market, We Have Augie a New Kong Goodie Dog Bone!

After getting back from our downtown Farmer’s Market adventure we gave Augie one of his doggie Birthday presents.  It was a Kong Goodie Dog Bone!  We got him a new dog chew toy that he instantly was in love with!!  The KONG Goodie Bone is a durable dog toy and it is very enticing because you can stuff the ends with Kong treat recipes or other dog treat snacks. 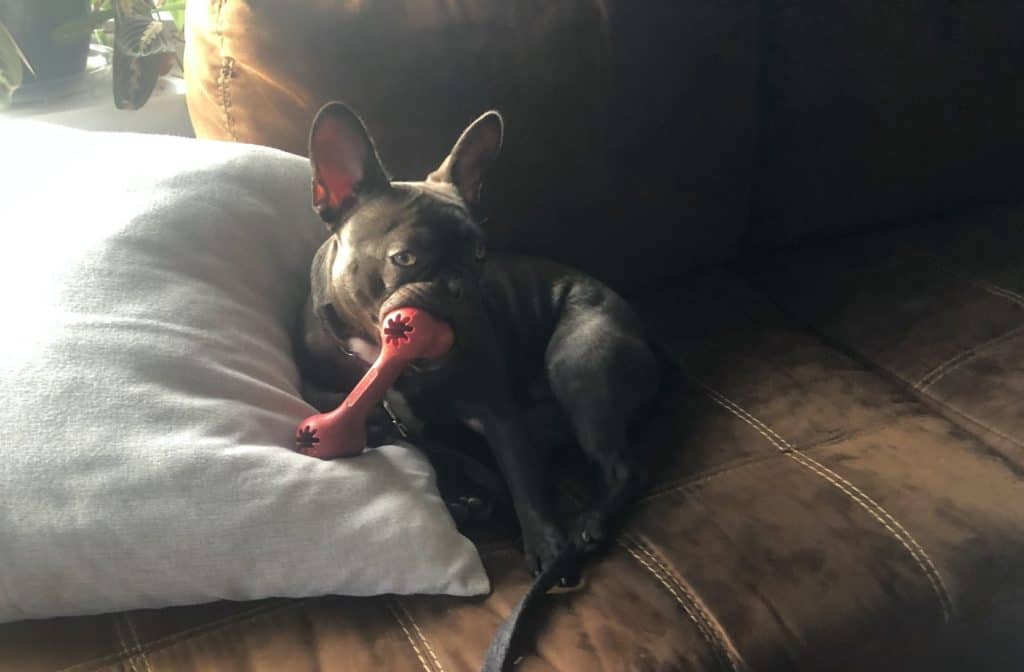 It was pretty entertaining to watch the birthday boy enjoy his new toy!  He jumped from spot to spot throughout the house to enjoy his birthday present. 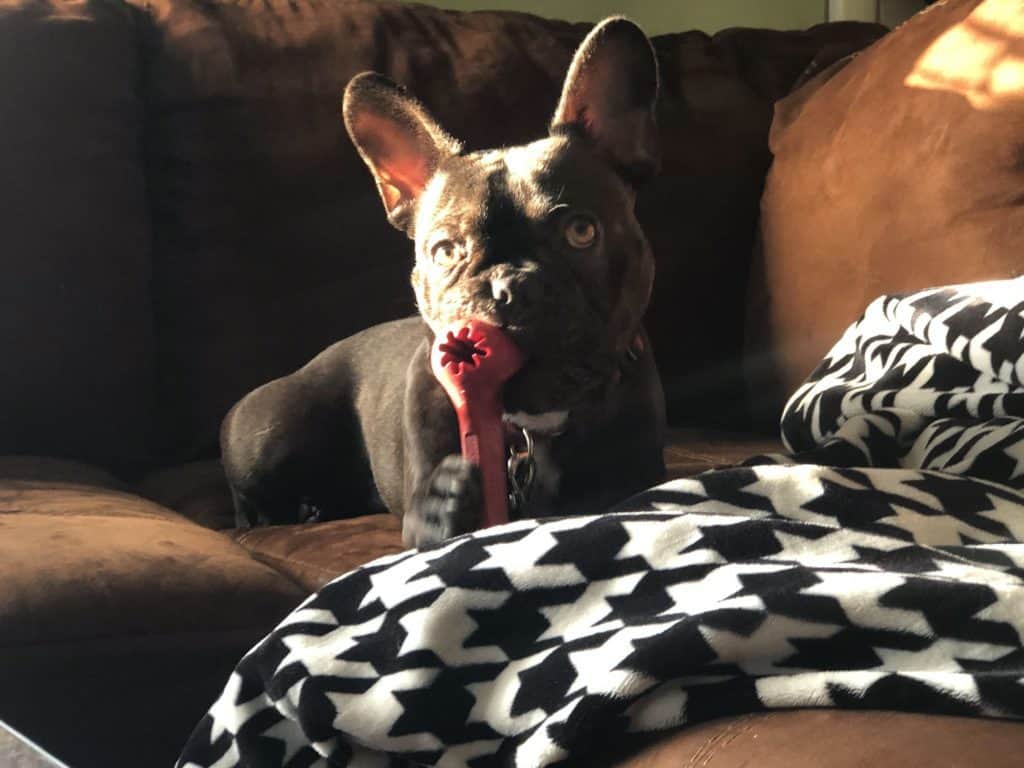 After some serious play time it Augie was due for a bath so we brought him to the tub with his new toy!  He enjoys bath time, especially when he has a toy to play with in the tub.  I scrubbed him down with some Dog Whisperer Shampoo from YaYa Organics and after rinsing the birthday boy, dried him off. 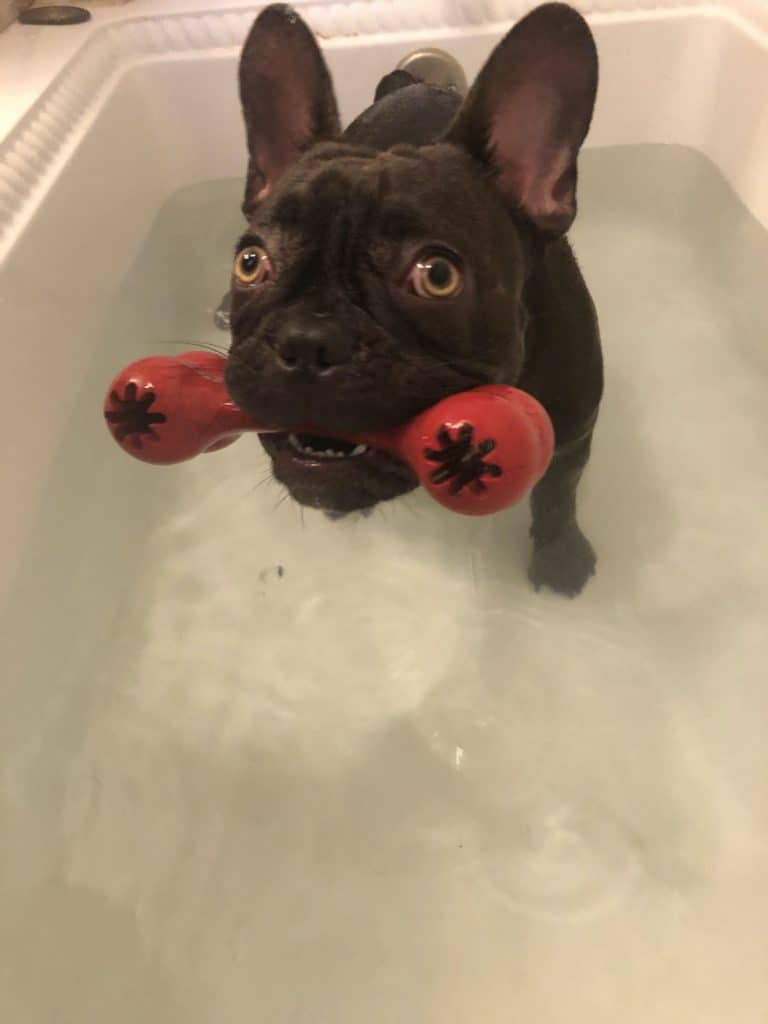 After Bath Time, Augie Went To His Dog Exercise Pen To Dry Off And Enjoy A Himalayan Dog Chew Treat!

After dong our best to dry off Augie we put him in his Midwest dog exercise pen and gave him one of his favorite dog treats:  a Himalayan Dog Chew.  Man he loves these things!!  They keep him completely occupied and he loves them. 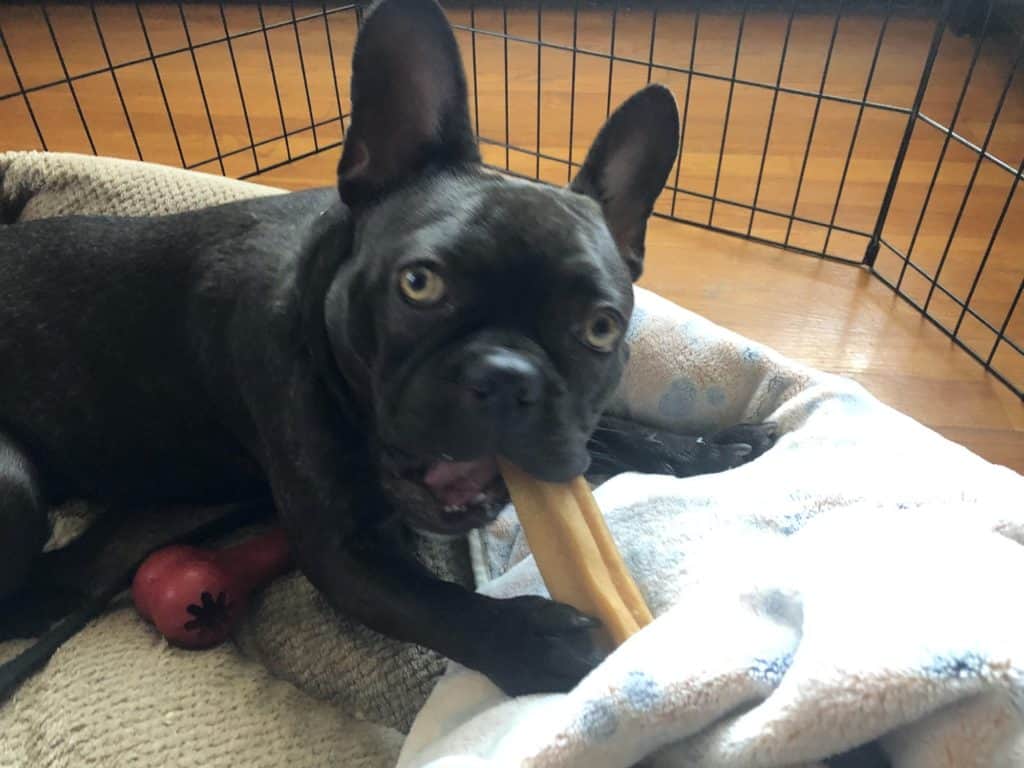 A Visit To a Local Dog-Friendly Brewery!

After drying off and enjoying another birthday treat, Augie went for another rider with his favorite humans to a local dog friendly brewery near our house.  At the brewery he met some other puppies and some bigger dogs that were there with their humans too! 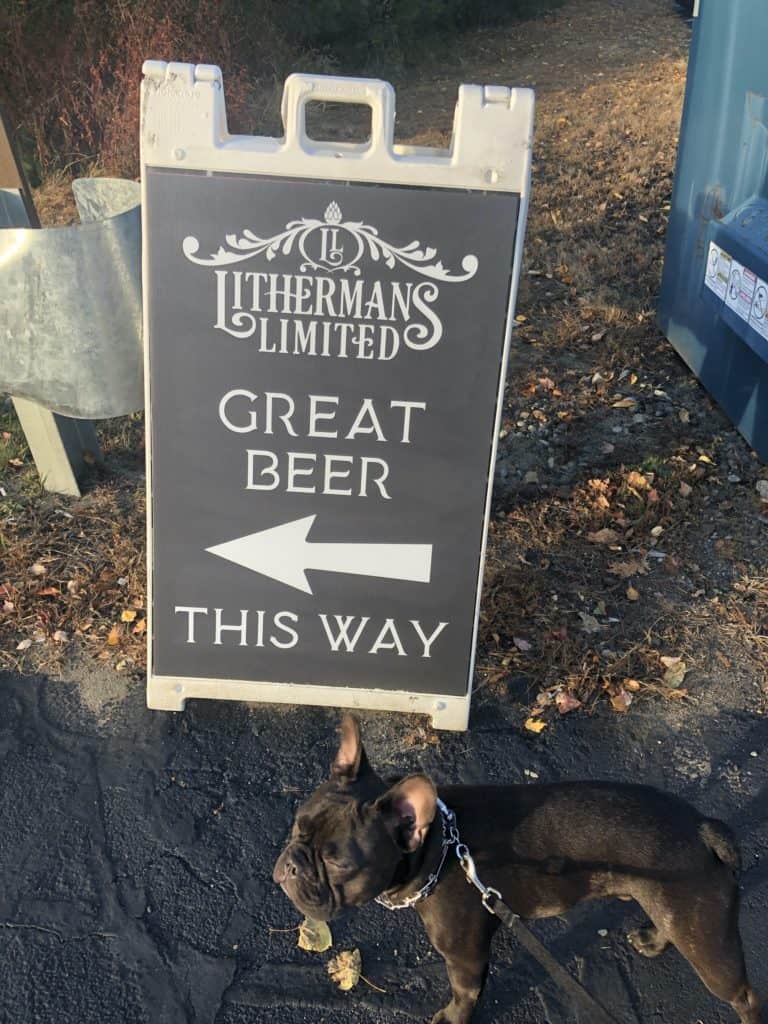 My Tired Birthday Boy At The End Of His First Birthday!

After a busy full birthday our little guy was pooped!  His favorite way to end the day is to curl up on the couch with his mama and lay on her soft blanket.  He passed right out and slept like a baby the rest of the evening.  When we went to bed, I scooped up the birthday boy and carried him down the hallway to his dog crate. 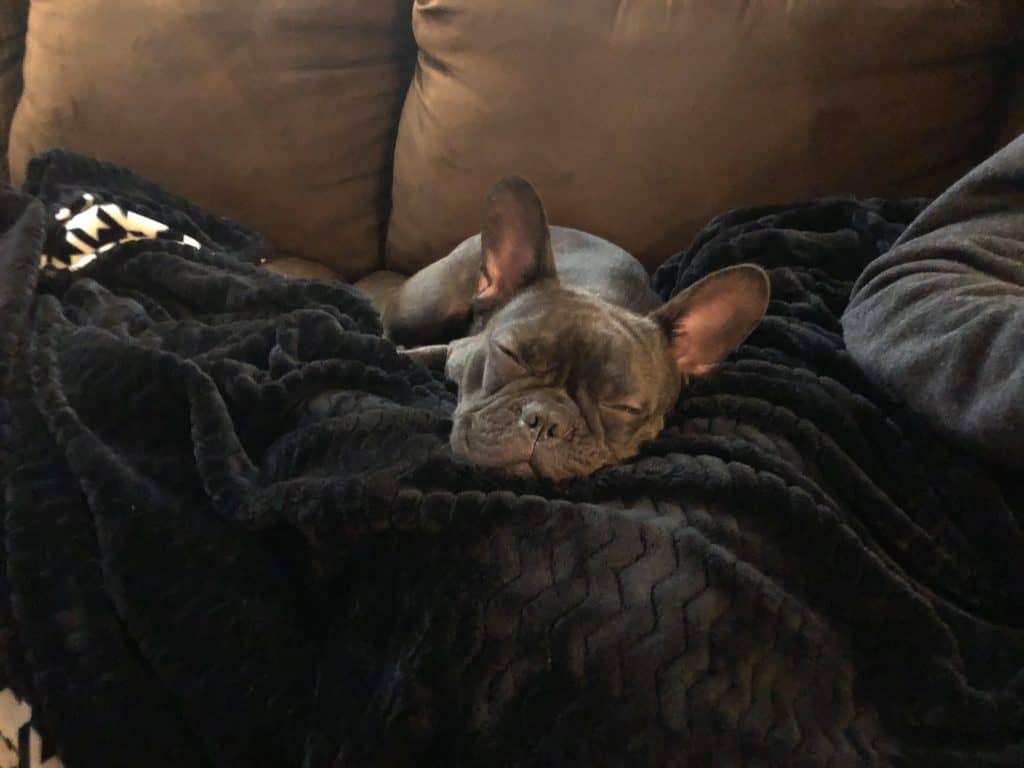 Happy Birthday Augie!  He Enjoyed His Puppuccino, His New Toy, His Treats And All Of The Other Special Birthday Moments!

We did our best to show our little guy a great day!

Kyle has been a bully breed lover for over 13 years. His newest dog is Augie the Frenchie. His mission is to share his French Bulldog experiences so other Frenchie owners can give their dog a great life.
PrevPreviousThe Ultimate Guide to Buying a Portable Dog Fence for Your French Bulldog
NextWhat Is The Best Dog Cooling Vest To Keep Your French Bulldog Safe On Hot Days?Next